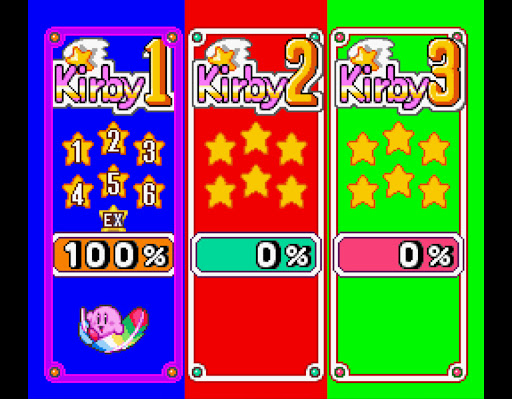 Well what can I say about this one? Firstly I am not even sure I should count this as one game. It's really 7 separate games in 1, each with their own play style and story, but I they are bundled together in such a way that it requires you to beat them all in order to 100% the cartridge.

This one took me quite a bit of time, especially getting the last two percent. I went ended up playing through a few of the games more than once because I wasn't sure why I hadn't gotten 100% after I had beaten them all.

Turns out there were a few secret exits in one game that I wasn't aware of but I eventually got it sorted and as you can see 100%. This is a pretty great game and will give you quite a few hours of pleasure. It was almost a bit -too- easy with the amount of power ups and healing available before most boss encounters and the fact that Kirby can just hold block and for the majority of boss fights take no damage. Despite that, the non-linear games such as The Great Cave Offensive and to a lesser extent Milkyway Wishes provide quite a bit of challenge.

I've always wanted to 100% this one so I am happy to have done it today. If you're looking to kill a few hours with the SNES and looking for a lesser-known game to take up your time, check this one out.
posted by themoogle at 6:11 AM 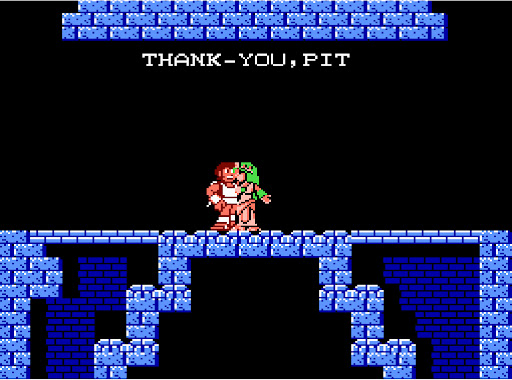 Another day, another game! Going back to my NES roots this time and tackled a game that I've never beaten before. With good reason, it's hard!

This is the best ending (you can see here that Palutena is giving Pit a kiss) which you can only get by maxing out four different variables. Hearts, Strength, Level and getting all the weapons. I was doing well on all of them but level and spent about an hour just grinding before the end of the last world. You needed at least 200,000 points to reach level 5 and I had about 100,000 haha. Needless to say quite a few enemies died to get that 100k. The strength thing I never did figure out. I got it to level 5 but I really have no idea how, so I just got really lucky here.

Given that this is a game which people often place in their top NES game lists it's nice to finally have beaten it myself. I finally understand why people like it so much. Just the right level of challenge.
posted by themoogle at 2:34 AM 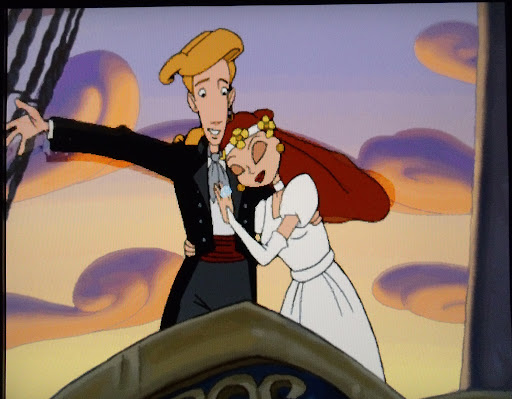 PC: The Curse of Monkey Island

Happy 420 everyone! I'm not a huge celebrator of many occasions, but 420 and the May 2-4 weekend I tend to go out of my way to celebrate. On to business however!

Curse of Monkey Island is the third installment in the Monkey Island franchise, and is a personal favourite of mine. When it first came out 13 years ago it was a massive step up from Monkey Island 2.

I managed to finish this in about 2 days but I could have easily done it in less. I was taking my time to savor the moments. As you can see I had to take a picture of it with my camera which is why it is so blury but I forgot because the game is played in DOS using Prt Scrn doesn't work properly :\. I debated replaying it in a special program to allow me to take a screen shot of the end (because I was unable to convert my save files over to said program) but in the end I thought it looks good enough.

Some of you may remember me beating the remake of the original Monkey Island back in September, and the reason that I have skipped over the sequel to that game is because there is a REMAKE of it in the works! It should be coming out this summer, so I will make sure to get it once it hits the shelves.
posted by themoogle at 3:48 AM 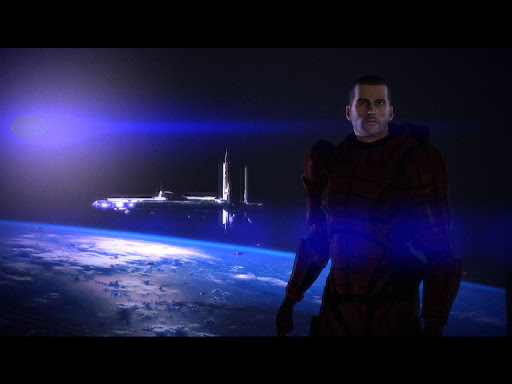 I have done a great injustice by taking so long to add this game into the trophy room. If BioWare has proven anything in the last decade it is that it consistently produces the best Role Playing Games in the genre, western and Japanese included.

The story telling is typical of BioWare, grade A stuff. Not to mention the fact that it looked beautiful. Excellent use of ambient music and sound as well which really draw you into the experience. I can't recommend this game enough. I have yet to play the sequel but rest assured it is coming soon. I have heard that it's a great improvement over Mass Effect and that is saying a lot. Play. This. Game.

I know that it's been a while since I updated but I was tied down with school for the last little while. Now that the semester is drawing to a close I will have a lot more free time to devote to updating the trophy room. Also, the trophy room recently celebrated it's first year as I uploaded the first game on April 9th of 2009. It's come a long way since then, but I still have a lot left in me. Game on!
posted by themoogle at 9:40 PM 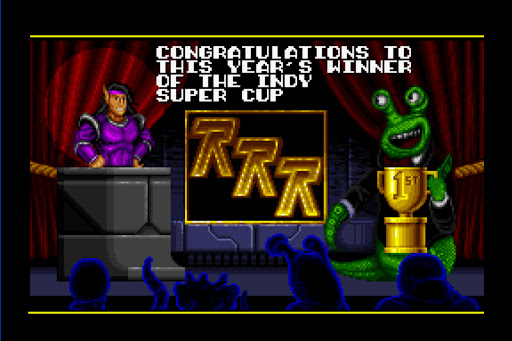 SNES: Rock n' Roll Racing
Probably one of the best racing games on the SNES. I beat this over the course of a few days and it wasn't too hard until I reached the last planet. Then the game becomes extremely hard. I beat this game on Warrior mode which is the hardest difficulty, but I didn't really notice much of a difference between the endings other than the title of the race you ran. Over all a fun game if you just want to kill a few hours.
posted by themoogle at 7:41 AM