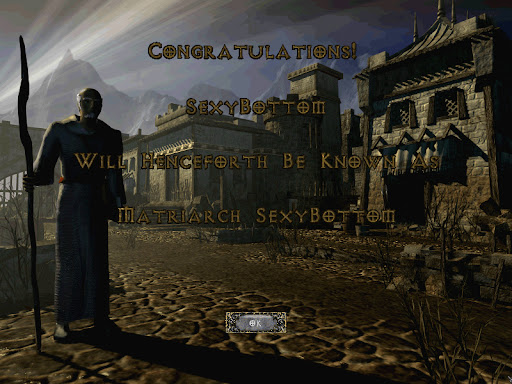 PC: Diablo II
Well what can I say about this? SexyBottom the Sorc is victorious! If you don't know Diablo II you're probably not a gamer anyways. Flew through this game. 2 days and I am level 65 when I killed Baal. I don't think there is a game out there that is more of a time sink than Diablo II. I spent many a year of High school playing this game with friends... and now that I am back I am I will probably sink quite a few more hours into it...

Special thanks to Zach for helping out.
posted by themoogle at 12:53 AM 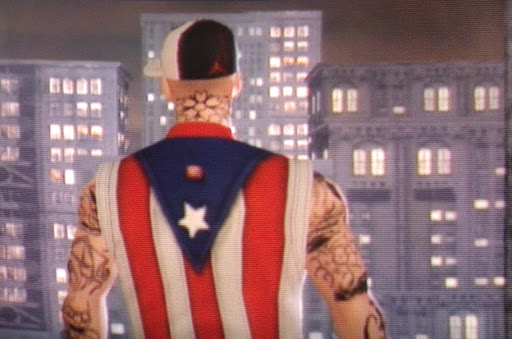 Xbox: Def Jam: Fight for NY
I can already see the comments, I don't care. Even if you hate rap, this is one of the best fighting games I have ever played on a console. The level of character customization and move selection is awesome. Not to mention that the controls are awesome and smooth. My only gripe is that some of the fights are basically impossible on hard mode.

I had to switch to medium for a couple of fights vs. Fat Joe. (Only Fat Joe though, for whatever reason I can't KO him on hard mode >.<). 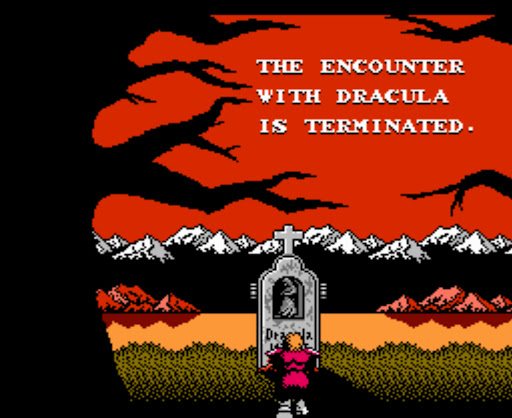 NES: Castlevania II: Simon's Quest
In the words of the Angry Video Game Nerd "this game... is the unholy fuckness." and indeed it is. If I didn't know where to go based solely on the fact that I played this game before, I'd have NEVER finished it without a guide. It's fucking impossible. Nothing is self evident, and the people in the towns don't tell you ANYTHING. As a kid I cleared 3 castles... so getting that far this play through I actually remembered. Watching the nerds videos I got the rest. Even with all that I just BARELY got the good ending. If my fight with Dracula had taken about 30 seconds longer, I'd have gotten the other ending where Simon dies. And maybe that would be fitting. Because I died. And died. And died. And died. I jumped into water, and died. I was gangraped by enemies and died. I think ironically the only things that never killed me were the bosses themselves. Everything else was like death trap after the first castle.

Either way, victory is mine, this game is beaten, and I will never play it again.
posted by themoogle at 3:24 AM 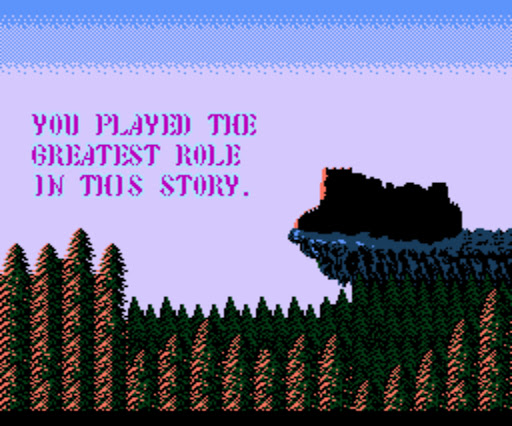 NES: Castlevania
It's Castlevania on NES, what more can I say! As some people may know AVGN is taking us back to the past this month with his Castlevania series review, and because it's so close to Halloween I figured hey, why not join the fun?

The game defines platformer. I've done quite a few Konami games (33, 34, 36, 37) in the trophy room, one of them being a Castlevania game, and so far and with good reason, they make awesome video games! This game is no exception! Nothing like plowing through Zombies, Mummies, Hunchbacks, and all sorts of other demons before kicking the shit out of Dracula himself. Took me a few hours to beat, mostly because I didn't go right through and left it on pause. Playing time was a probably an hour or so. End of the day I finished with a respectable high-score as well: 179400. 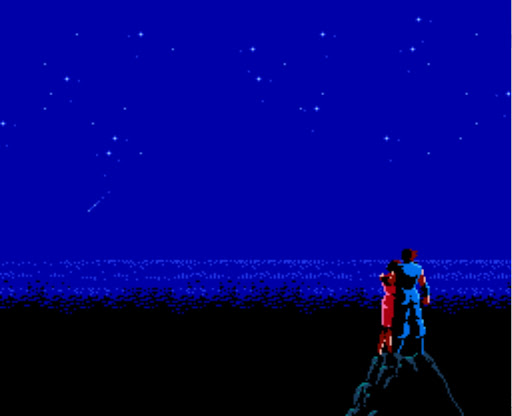 NES: Ninja外伝 II: The Dark Sword of Chaos
Wow, I can't believe how quickly I beat this! I didn't realize it was such a short game. It was so good too! I think this took about an hour to beat, not much more at any rate. I pretty much can't say a bad thing about it. Great music just like the first one, same awesome level design, great controls. A must play for the NES.
posted by themoogle at 8:28 PM 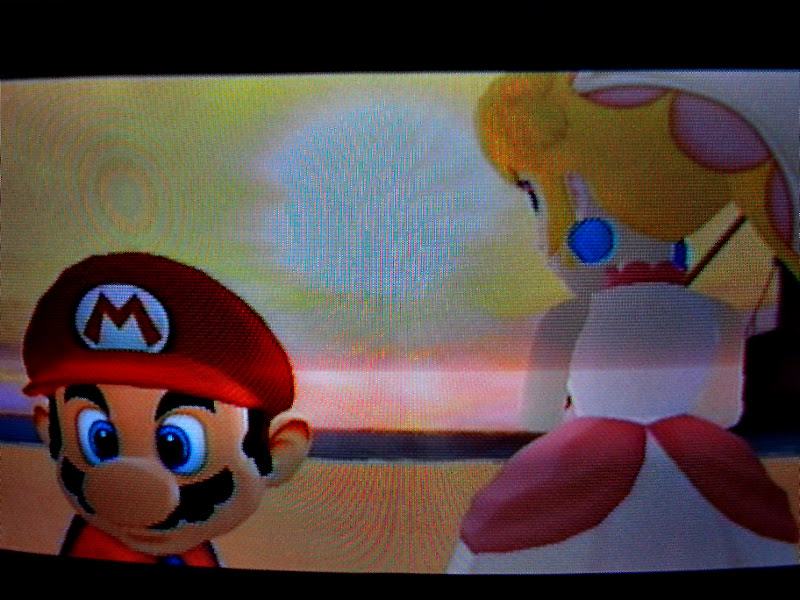 Gamecube: Super Mario Sunshine
Woooo! That one took some time! I'd just like to appologize for the quality of the image here first of all. I know it's not a shot of the special ending but I when I took it with the camera and finally scanned it into the computer, it was blury >(. This one turned out all right, considering it's on TV. Next time I play a game on an actual television I will try and get a better picture.

Anyways, this game took me forever. I had been playing it off and on for a few weeks but over the last couple of days I really buckled down and started playing. I managed to get everything, all 120 shines. Pretty fun. Some of them however are ridiculously hard. Overall though it added to the challenge. (Though losing 30 lives in one level is a bit insane, and that doesn't include all the times I picked up a 1up to offset the life I lost in there...)

I know this game is pretty much universally ignored because most people think it's crap, and I have to be honest I was one of them for many years, but on my second play through the game definitely provides a good deal of entertainment. I'd recommend it!
posted by themoogle at 11:07 PM 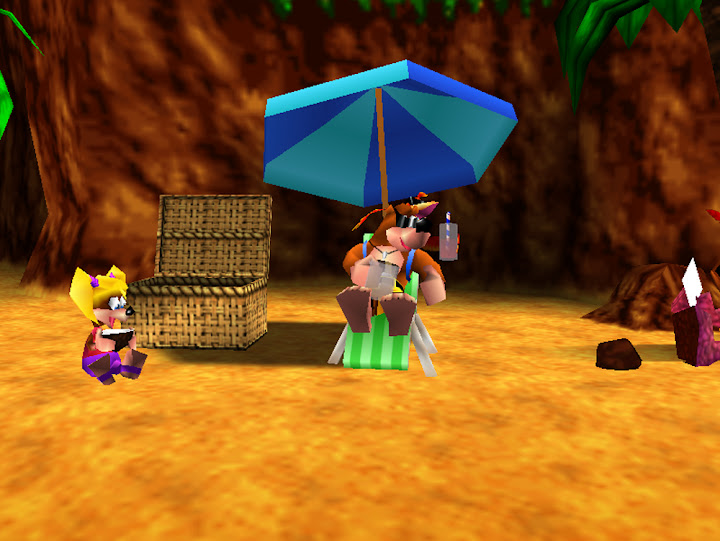 N64: Banjo-Kazooie
Hard to believe my game is done,
I beat it quick because it was fun!
With bird and bear I travelled fast,
And got every secret at long last.
I'll be back with Banjo-Tooie,
Cause Grunty still is being a bully.
For now I quit because rhyming's lame,
But please go out and play this game!